FOR JACQUES SOULAS, art is almost like an impulse, an urge. “If I don’t do it for a while, I become restless,” he says. He started practicing art at a young age, about 8 or so, in public school in France. He became immersed in French art in middle and high school, where his classes would visit art museums in Paris. One of the first exhibits that fascinated him was a retrospective of Vincent van Gogh at l ‘Orangerie in Paris. “I was absolutely blown away by his use of such bold color, especially the color yellow, of which I consider him to be a master.” During this time, he also was able to visit the Rodin Museum in Meudon; see the first retrospective in France of Georges Latour, 20th-century artist Georges Rouault; and many others. “All this art made a deep impression on me and all I could think was: ‘I want to do that!’”

Inspired, he joined a pottery club in his free time in middle school, and by the time he was 18, he was taking night art classes offered by the city of Paris. At these classes, he experimented with live model drawing, watercolor, and basic architectural rendering. Upon arriving in New Orleans in 1979, he enrolled in the John McCrady Art School while working as a waiter at Café Du Monde. He moved to the New Orleans Academy of Fine Arts in 1982, where he studied under Auseklis Ozols, and stayed there while working as a waiter until 1993. 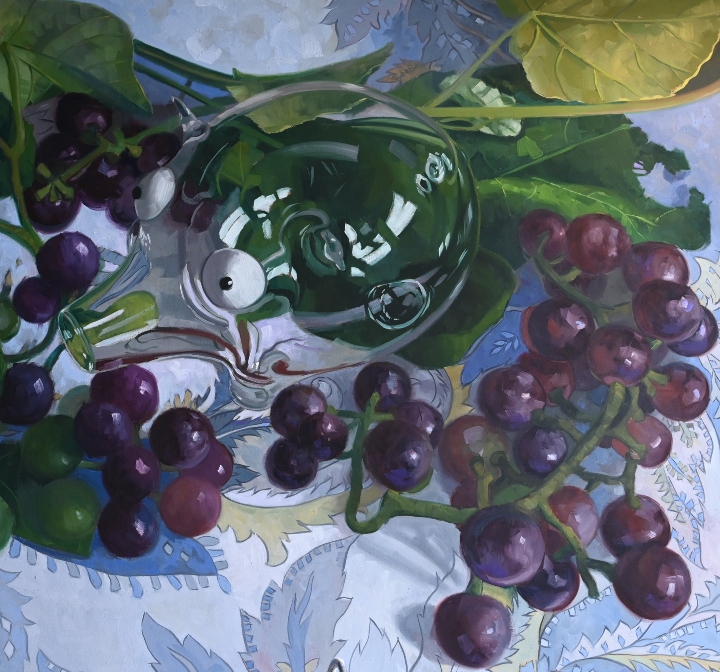 Though it’s hard for him to place a label on his art, he tends to describe it as “contemporary realism.” “I pay a lot of attention to color, sometimes more so than the subject matter,” he says. He tends to opt for simple color schemes, with just a few colors and their derivatives, such as blues with oranges and reds with greens. “Lately I have been using blues and blue grays in my background to vary the overall effect. I tend to have a blue bias.” His main medium is oil on Belgian linen or canvas, though he will occasionally work in gouache, sometimes known as poster paint.

Another aspect of his style is that he uses as large a brush as possible and is conscious not to blend his brush strokes within an object. “I want the strokes to stay obvious, alive and fresh. I’m also very aware of keeping the edges between foreground and background, or between two objects, as soft and as wet as possible. I try to achieve a blurry edge between objects.”

Jacques finds inspiration from many different aspects of life. “For the still lifes, I use glass balls (because I love reflections), fruits and vegetables (which I grow in my backyard), and any other common object I find around the house. Sometimes I simply go to the grocery store and look in the produce aisle for inspiration. Then I add colored and patterned cloth and combine all these elements into a composition. If I’m doing a landscape my inspiration can be very fleeting: a glint of sunlight reflected in water; or the shape of a shadow or structure; or foggy moisture rolling over the bayou, can each be enough to get me started.” 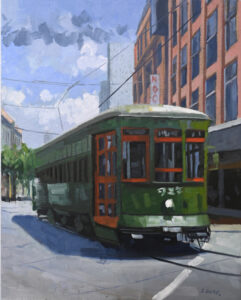 Of course, his favorite location can be seen all throughout his work – New Orleans. “It is such a unique and romantic city. Its rich architecture, its beautiful tree canopy, even its funky streets offer a lot of inspiring material to work with.” He also particularly enjoys painting streetcars. “In the streetcar painting on the cover of Inside New Orleans magazine, I actually looked for an uncommon ‘untouristy’ view,” he says.

Jacques also owns Café Degas, a French restaurant in the heart of New Orleans. According to him, owning a restaurant is the complete opposite of art. “The restaurant business is dictated by a lot of rules and constraints such as employment, competition, state and federal regulation etc. But art, on the other hand, is freer and allows me to break rules. Art is the other side of my life that challenges me to constantly experiment, try new ideas and concepts, stay open and receptive to the environment around me.”

You can see Jacques’ work at his show at Degas Gallery in the Warehouse District of New Orleans, as well as all over Café Degas.

“I hope that my viewers enjoy my work and can share my passion for doing it. I’m not trying to make a social commentary on anything, I simply want to express the beauty that is around me. Occasionally my painting may bring a little twinkle to someone’s eye and that’s great.”

Teeing up the next 25 years at Money Hill