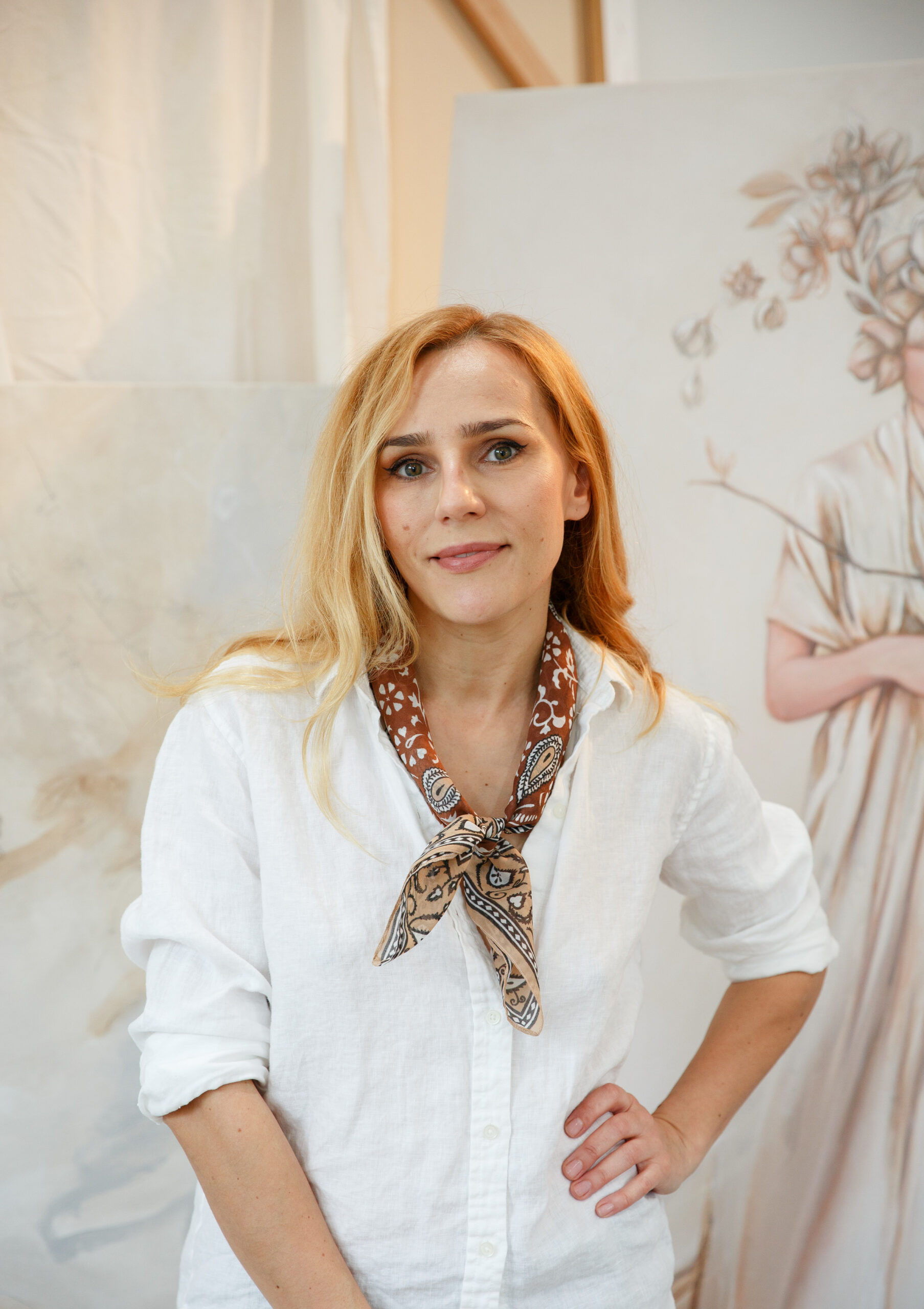 WHEN GAZING UPON one of artist Zana Ranđelović-Brown’s Flowerhead paintings, femininity gently exudes from the woman’s physique and clothing while emotion and inner thoughts bloom from her head. The floral headdresses have become a signature of the Serbian native, now New Orleanian.

The feminine style of her work is natural for Zana. “It’s just who I am and my way of expression. It’s the way I feel things and then portray them,” she says. When approaching the canvas, Zana lives with an idea for a while before letting the energy and emotion come to her. This process especially applies to her Flowerhead series.

“Flowerhead is a state of mind and getting there is a life process,” Zana explains. “It’s the idea of having to close your eyes to see, slow down and look inside ourselves. We live in a very fast paced world and often we get caught between demands of society, our family, and our own expectations. We search frantically for the answers around us when instead we should just slow down and turn to ourselves. Once we learn who we really are inside and what we really want, then we can grow on the outside because we know where to go from there. That’s when we bloom.”

And bloom Zana has. Moving to America as a student 12 years ago, Zana did not know anyone in the city. “This was probably the most challenging experience for me as a young immigrant woman learning English, because I often needed guidance and support. I did not know how things were done here, or anywhere for that matter. I knew that I wanted to be an artist, but I never had a clear vision of becoming a business owner. Over the years, I was so lucky to surround myself with strong and courageous female figures here in New Orleans and they taught me about different opportunities in the world of art.”

Now a full-time artist, mother and female business owner, she reflects, “I am so grateful for those mentors and other female artists who have shown me that it is possible to own my own business. When you’re an artist, you rarely refer to yourself as a business owner, but in reality, we are entrepreneurs. I had to step out of my comfort zone and learn about the business side which was not easy for me. It was all worth it because now I have the opportunity to share my paintings with the rest of the world.”

Zana’s desire to become an artist began long before she came to the United States. Her first memories include drawing in elementary school and helping her friends with their art classes. At just 11 years old, Zana had her first painting displayed in a local gallery. She says, “I was so proud. No one else in my family thought it was such a big deal, but that was because I grew up in a wartime. As a kid, my parents shielded me from the horrible situations, but I knew enough. Art was on no one’s radar. It was survival mode for everybody.

“Wartime doesn’t give you the freedom to dream of being an artist, so my parents tried to steer me toward something more applicable to the real world—they wanted me to survive. And I tried more practical options, but art always came back to me.”

Since becoming a professional artist, Zana typically has enjoyed working alone
in her studio. “I do my best thinking when I disconnect from the world and get into my zone. And once I’m in my zone, I lose track of time. I can spend days and nights there. It’s almost not healthy,” she laughs. “On those days when I’m painting like a crazy person, I run on Turkish coffee and at night, red wine.”

Things have looked much different for Zana this past year, especially her time in the studio. She has balanced homeschooling her 7-year-old son, Luka, while attempting to paint and entertain him. Luka, as well as their studio tortoise, Lola, have become quite the celebrities of Zana’s social media where she shares her painting process and current works. “Luka is well known to people who follow my art on social media. I’m the least important,” she grins.

Prior to the pandemic, Zana also spent a lot of time traveling, setting up improvised studios wherever she went. “Since moving here, I have been able to travel extensively to different cities and counties, but, outside of Serbia, only New Orleans has felt like home.”

From her first day in New Orleans, she says that she immediately felt that she belonged. “One thing that inspired me about New Orleans is how it rises above adversity. It’s one of very few cities that is able to transform pain into a pure, beautiful form of art. I just think New Orleans is so rich with art culture that it attracts very artistic people.”

Truly, New Orleans is so lucky to have attracted Zana.

Teeing up the next 25 years at Money Hill